In Loving Memory of Michael Thompson

On Tuesday, August 24 2021 Mike Thompson passed away after a long battle with lung cancer.   Mike was a life-long San Bruno resident and long-time resident of our Second Ave boarding house.  We were able to host in-home hospice care for Mike for most of his illness, but he spent his final three weeks at St. Francis Convalescent Pavilion in Daly City.  We first got to know Mike twenty years ago as a guest at our dining room and homeless shelter.  Thirteen years ago when we turned our Second Ave house into a boarding home Mike was one of the first people I brought into the house.  I quickly came to depend on Mike as the informal house manager.  He would take out the trash, wash the shelter laundry, and let me know if there were any problems at the house.   His presence made my job much easier and the house a nicer place for the other residents.

Hanging out on the back porch together, Mike and I often bonded over sports.  In typical male fashion it was always a safe and easy source of conversation.  We had our yearly big money bet ($1) on the Texas-Oklahoma football game.  Having been born in Oklahoma, Mike was a fan of the “land-thieves” from north of the Red River.  While it was fun to watch the game together, I sadly often lost the bet.

At Catholic Worker we too often only see our guests at their worst or “past their prime.”  In 2013 we got to see a different side of Mike.  Mike grew up in the Rollingwood neighborhood of San Bruno and attended Crestmoor High School and was featured in the book “Michael and the Whiz Kids” by John Christgau.  Christgau was the head coach of the school’s “lightweight basketball” team (a high school league for smaller players).  The book chronicled the team’s 1968 championship season, focusing on what it was like for Mike as the only black kid on the team and in the school.  The book was a good read and it gave me an opportunity to see a different side of Mike.

Living at the Second Ave house enabled Mike to restore stability and dignity to his life.  This led to him reconnecting with his son and grandchildren after years of marginal contact.   It was always heartening seeing Mike and his son spending time together, usually they just talked and argued about sports, but it was easy to tell they enjoyed each other’s company.  I loved the backyard cookouts and domino games that Mike would host with his family and friends which brought such joy to the house.

We are so thankful to have had Mike be a part of our work and life for over twenty years.  He was a blessing and a joy, even with his grumpy old man façade.  Rest in peace Mike, you will be greatly missed. 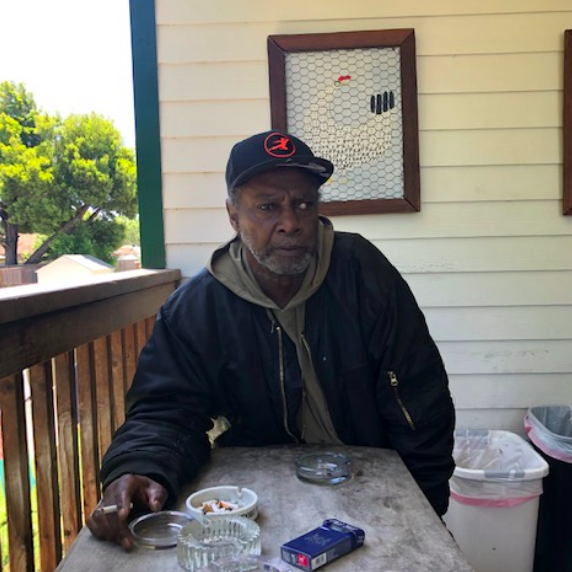 Mike Thompson on the back porch of the Second Avenue house.