by Ella Chatfield-Stiehler on February 2, 2021

On February 28, 1996 Kate Chatfield and I moved into the house at 672 2nd Ave. in San Bruno with the hope of starting our own Catholic Worker House.  We were newly married and full of grand plans fueled by faith and idealism.  We quickly filled the empty bedrooms with people in need of hospitality and started a free dining room in St. Raphael’s Hall on the grounds of St. Bruno’s Catholic Church.  Thus began the work of Catholic Worker Hospitality House.  25 years later there has been a lot of changes to the work as well as a lot of continuity; we have been successful in some of the things we started and not so successful with others.  In some ways it feels like just yesterday that we started and in others it feels like a lifetime ago. 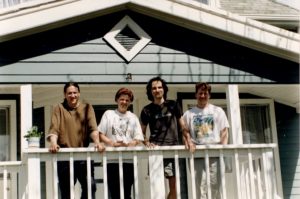 I’m a person who likes to mark anniversaries and over the years I’ve written several anniversary letters relating the adventures we have had during our time at Catholic Worker Hospitality House (CWHH).  But I feel this anniversary is different, 25 years of doing anything is quite an achievement and should be appropriately commemorated.  So this year I plan on devoting several of our newsletters to the story of Catholic Worker Hospitality House.  In this letter I will reflect on why Kate and I started a Catholic Worker house, acknowledge those who were instrumental in helping us get established, and how the work has continued all these years.  In future letters I will talk about our service projects and how they have evolved over the years, partnerships we have developed and maintained over the years, and other inspirations that come my way.

Over the years numerous people have asked Kate and me what inspired us to start our own Catholic Worker house.  Quite simply, we both take our faith seriously and believe that a living faith is one based in service, particularly service to those most in need in our society.  It is also rooted in a political commitment that critiques the prevalence of capitalism and militarism in our society—systems that leave people to live and die in our streets. Before we met we were both searching out ways to live a life of service, our search first led us to stints in the Jesuit Volunteer Corps (JVC) and then the Los Angeles Catholic Worker (LACW).  We met while I was working at the LACW after my JVC days and Kate was still in the JVC.  After her time in JVC was over, Kate joined the LACW community where we both worked for the next two years.  We found in the Catholic Worker Movement a model of how we could live an authentic Christian life, raise a family, and serve others.  After getting married in May 1995 we knew we wanted to continue in this work, but we wanted to do it in our own house.

What does it take to start and sustain a Catholic Worker House (or to be honest, anything in life)?  It takes commitment, particularly a commitment to service.  Kate and I had that in the beginning and we still have it today.  We are committed to each other and committed to the hard and often unglamorous work of serving those in need.  I believe commitment not only gets one through the hard times, but that it attracts people who want to support and join the work. While Kate and I have played an important part in starting and sustaining the work of CWHH, I am also cognizant of the fact that a large part of the vitality and longevity of this work is due to the faith and commitment of numerous other individuals and organizations who have been a part of the work of Catholic Worker Hospitality House over the years. 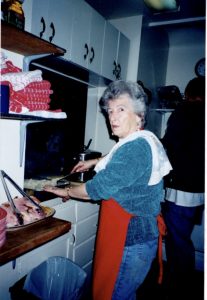 Throughout the years there have been dozens of faithful volunteers who have given their time, talents, and resources to make the work of Catholic Worker Hospitality House possible.  I think of Mary Pleas, our first volunteer, who insisted we keep the dining room open when we wanted to give up on it three months after we started because not enough people were coming to eat with us.  Think of all the people who have benefitted from the vision of this stubborn Irish woman.  Without the dining room there wouldn’t have been a shelter, without the shelter there wouldn’t have been our affordable housing units.  Small actions can cause large ripples.  There have been numerous other “stubborn Marys” over the years whose vision and commitment to service have kept our work going and have benefitted our guests in unforeseen ways.

Would our dining room and shelter even have been possible without the support of pastors and parishioners at St. Bruno’s Catholic Church in San Bruno who gave us use of a parish building for our service projects?  There are few churches that would allow a dining room in one of their buildings and even fewer that would ask for a homeless shelter, but that is what St. Bruno’s did.  25 years ago we were welcomed into the parish by Fr. Ron Burke – a man who lived his life in service to the poor to the point of having to flee Guatemala just ahead of US-backed death squads.  We do our best to operate programs that are orderly and respectful of both the parish and neighborhood.  Still, it can be trying to have us and the work we do on parish grounds and it takes a lot of faith and forbearance on the part of parishioners.  It is through their committed witness in support of our work that many other parishes and congregations have come to be a part of our work. 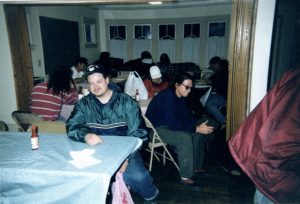 I think about the people both past and present who have worked as overnight staff at our homeless shelter – James, Tracy, Judy, Pat, Frank, Eddison, Dean, Gary, and Jonathon.  It is their faithful service that has enabled us to keep our shelter open year-round for 23 years.  Some were shelter guests before they became staff, while others were dining room guests.  Their experience as guests gave them first-hand knowledge of the importance of operating a shelter that is dependable, dignified, and respectful of the needs of those we serve.  I would be remiss if I didn’t emphasize the importance of the 21 years Pat has worked at the shelter.  His compassion and calm composure has been the ballast enabling the shelter to weather the storms of angry neighbors, parishioners, and guests.  He epitomizes a commitment to service.

As stated at the beginning of this letter, Kate and I started CWHH together.  However, after eight years she left the daily work of CWHH to continue her life of service as a lawyer working on behalf of the accused and imprisoned, while I continued on with the daily work of serving our guests.  I want to end this letter by expressing my gratitude at being able to make Catholic Worker Hospitality House my life’s work.  It has enabled me to live out my faith in the most authentic way I know how, it has made me a better person, and it has filled my life with good and loving people.  For this I am and will be eternally grateful to you, the myriad individuals and organizations, who have joined and supported our work these 25 years. Without your loving kindness our work would not be possible.  As I hope to continue in this work, I hope for your continued generosity of time and resources to keep CWHH a vital part of our community.  Deo Gratis.

For all of us at

See more photos from 25 years of the CWHH!