by Ella Chatfield-Stiehler on September 1, 2020

August 6 marked twenty years that Pat Ford has worked as an overnight staff person at our homeless shelter.  When I asked him if he would be interested in the job he was a relatively new guest at the shelter. I didn’t know him well, but he seemed like a stable and responsible guy.  I had some concerns about whether he would work out, but we were desperate to find an evening staff person as the previous staffer had left for another job.
Why was I concerned?  As a Navy veteran and life-long conservative Republican, Pat seems like an odd match for a Catholic Worker homeless shelter.  While it quickly became clear that Pat was competent in his position, for the first few years Pat worked with us we regularly argued about politics. It felt like “The Odd Couple” or “Point Counterpoint.” “Crazy liberal!” and “Fascist!” were thrown around a lot.  It would have been so easy for both of us to look at our differences and not work together.  Instead we chose to focus on our common belief in service and caring for those in need in our community.  And the rest is history.  I think it’s fair to say that neither of us thought we would still be working together twenty years later.
Behind Pat’s gruff exterior is someone who really cares for our guests. As a former shelter guest and someone who went through hard times himself, he really feels their plight and goes the extra mile to assist them however he can.  He is much better than I am at motivating and assisting our guests in getting the services they need.
For new volunteers, particularly high school students, the shelter can be an intimidating place.  Pat invariably puts them at ease…and to work.  Whether it’s preparing food, cleaning up around the shelter, or sitting and talking with guests, he knows how to make sure they have a good experience volunteering at the shelter.  He’s also great at chatting them up, regaling them with stories of the shelter or his travels around the world.
Pat’s commitment to service and his kindness to those we serve makes him an invaluable asset to our work.  While I have a vision of how I want our shelter to operate, Pat has extensive practical knowledge forged from years of experience at the shelter. I regularly rely on him for advice on who to bring into the shelter and how long to keep them. If I have a “great” new idea for the shelter I have learned to run it past him first to see if it’s a feasible plan.  He also has brought great stability and an institutional memory to the shelter with his ability to remember past guests and whether they were good or problematic.
Pat has also been a great ambassador between Catholic Worker Hospitality House and St. Bruno’s Parish, where we operate the shelter and dining room. He chats up parishioners, particularly those leery at having a homeless shelter on church grounds.  If there is a question about our work or a concern about one of our guests, Pat is there to educate and take care of any problems.  Parish staff relies on Pat to make sure the church doors are locked, gates closed, and parish grounds are secure.  Considering that the existence of our dining room and homeless shelter at St. Bruno’s Church is dependent on the parish’s continued acceptance of our work, it’s hard to underestimate the importance of the goodwill Pat has engendered around the parish for the longterm viability of the shelter and dining room.
Thank you Pat for your many years of devoted service. The place wouldn’t be the same without you.  I hope we have many more years working together in service to those in need in our community.

Peter Stiehler
For all of us at
Catholic Worker Hospitality House

BE CAREFUL OF WHAT YOU ASK FOR 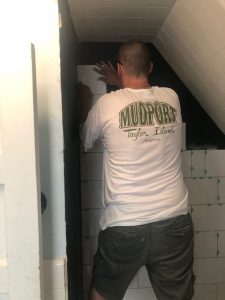 A couple of weeks ago I was sitting at my desk in the basement of our Second Avenue boarding house resting after having wrapped up several maintenance projects.  I was thinking, “Well, what am I going to do now?”  Just then I heard a steady stream of water dripping on boxes in the basement. “Oh no, this can’t be good.” I ran upstairs to discover the water was coming from 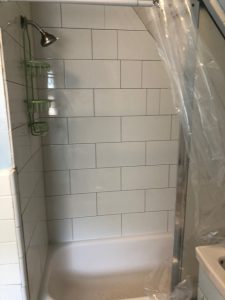 the upstairs bathroom where one of the residents was taking a shower. After investigating the situation it became clear that we needed to do a major rebuild of the shower.  While such a project is never a good thing, there were two bright spots: first, we have a second shower for the guests to use while we make needed repairs and second, Mike DiCampli, one of the house residents, told me he knows how to do tiling.  So it was clear we could do the repairs quickly and cheaply.  Together Mike and I did the needed demolition and repairs and we once again have a functioning, non-leaking, shower.  As usual, Mike provided the brains and I provided the muscle and the money.  Thank you Mike! In the future I’ll be more careful about looking for projects to keep myself occupied.