What to do with an incomplete sauna kit? 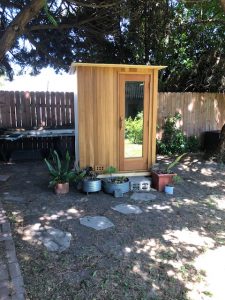 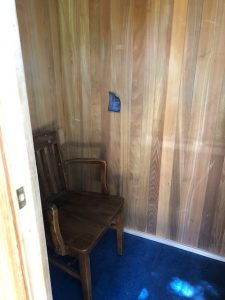 What do you do with an in-home sauna kit that you don’t have space for in your home and is missing parts of the heating element?  Well, that was the question I mulled over for several years.

My wife loves to take a sauna but I don’t enjoy it that much as I grew up in a sauna called Houston, Texas.  Several years ago a neighbor, knowing of my wife’s love of saunas, told us a friend of hers was giving away an in-home sauna kit.  I said, “No, thanks,” but my wife said, “Go get it.”  So guess what? I got it and put it in storage until we could figure out if it would work in our house.  Upon further reflection it became clear that it would not work in our house as we didn’t have space for it and we realized parts of the heating element were missing.  My first impulse was to trash it, but it was made of such beautiful cedar wood that I just couldn’t take it to the dump.  So what to do with it?

For three years it remained stored in the garage of one of our boarding homes.  I generally ignored it. But on occasion I would think, “What the hell do I do with this thing?”  Finally, it came to me: a meditation and prayer room. 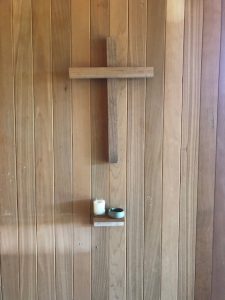 So a couple of weeks ago, with the help of a couple of guys from our boarding home, I built a foundation, put the panels together, and put on a roof with shingles.  There is now a nice 5’ x 4’ room for prayer, meditation, or just to escape others. At the moment, I’m mainly the person who uses it, but occasionally one of the folks at the Second Ave house spends some time in it.