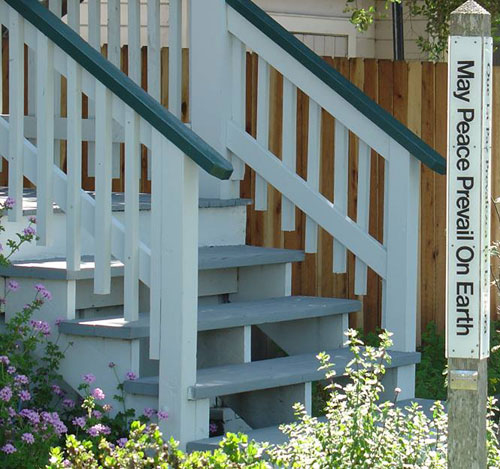 On a recent Tuesday while taking a break from our morning serving, long-time volunteer Mary Pleas and I sat chatting, updating each other on the goings on of various guests. “Have you seen so-and-so? What about Bob? I see that Doug is back again.” It seemed all of our responses to the inquiries were depressing: “Bob seems to have had a mental break, Doug’s housing fell apart again.” We just sat there for a while dejectedly shaking our heads. At times, it seems like our work is like watching a car wreck in slow motion: you can see something bad about to happen, can even try to stop it from happening, but often can’t do much about it. Then I piped up: “I’ve got a happy story. You know Jake, right?” Then I told her Jake’s story.

Jake is a long-time guest at the dining room and a San Bruno native. For most of the ten plus years I’ve known Jake he’s either been homeless or marginally housed. It was hard getting to know Jake as he would stomp into the dining room with a dark cloud around him (figuratively speaking), get his coffee and food, eat and smoke in the patio without talking to anyone, then head back to the liquor store where he would stand all day nursing a beer or two or three. He never acted out, or did much of anything actually, just stood on the sidewalk with his beer and cigarette in hand. Still, I have to admit his demeanor and persona are intimidating.
Then last spring a neighbor near the shelter started complaining about Jake, it seems he was put-off by Jake’s intimidating demeanor and vigil outside the liquor store. After several attempts to mediate the situation I came up with a solution: I offered to let Jake spend days at our Second Ave. house in San Bruno where he would have a place to pass the time in a more relaxing and welcoming atmosphere. We didn’t have a room to offer him, but he was welcome to spend days at the house. Knowing Jake’s lack of sociability I didn’t have much hope in the arrangement, but over the weeks and months a change started to occur. When I saw him on the back porch he’d be talking and joking with the other guys, at the dining room he stayed longer and was more engaging. Then, during the heavy rains of December he asked to come in the shelter. This was a shocking development as Jake had repeatedly refused offers of shelter over the years: “I can’t stand being that close to people.” I predicted he’d stay three days max before flipping out and returning to the streets. A month later he’s still in the shelter, the model guest. In late January an opening came up at the Second Ave. house and we’ve moved Jake into a permanent room there. When I told him what day he could move in, he got a big smile on his face and said, “Wow! I”m really going to have a place to live.” We’re still in a trial period, but considering his transformation over the past year we’re optimistic about his long-term chances at the house.

While I rejoice over Jake availing himself of the opportunity for permanent housing, this joy is tempered with sadness as Jake got a room because someone else was asked to leave. It’s frustrating being part of what seems a zero-sum equation when what is needed is a drastic increase in affordable housing for the very low income and in supportive housing for those with physical or mental limitations. Sitting in the dining room I count off person after person I know to be homeless who would not only maintain, but thrive, if given the chance at decent permanent housing. Most of the remainder would require housing with specialized care to do well. Instead both groups bounce around between shelters, couches, campsites, and jail. I think of Bob and Doug whom I discussed with Mary. Bob went from having borderline mental health issues to a complete break when he ran through all his shelter options and refused to go a shelter in another part of the county. Would some supportive housing help him? I think of Doug and the numerous folks at the dining room and shelter who, if a spot was available, would thrive in housing, much like Jake and the other guys at our boarding houses have.

At Catholic Worker Hospitality House we are blessed to have use of St. Raphael’s Hall for the dining room and shelter, as well as three houses to provide permanent affordable housing to those in need in our community, but we’re always dreaming of having more houses so we can provide a home to more folks. The need is so great. When frustration at the lack of affordable housing mounts we start thinking: “If we leverage this, then we can buy that…” It’s a struggle resisting the temptation to expand beyond our means to meet the pressing need. When opportunities to expand have arisen in the past few years, we’ve jumped on them, but until that miracle building or large donation for a down-payment arrives, we’ll continue operating our boarding houses, shelter, and dining room; assisting those we can while dreaming and preparing to do more.
As always, we thank you for all your support of our work. Your generosity enables us to continue being a stable, and, hopefully, compassionate presence for those in need in our community.